Ok Learn more Our websites use the analysis software Piwik for the statistical evaluation of visitor access. 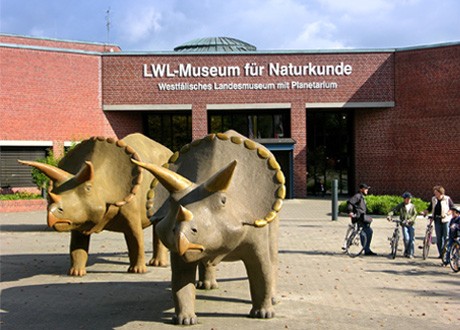 The Natural History Museum was founded in 1892. We show various special and permanent exhibitions on 4,200 square meters. The museum with an area of 3,500 square meters has many attractions to offer. Different entries to the museum allow you to explore the exhibitions. Visitors are welcome to extend their visit in the exhibition halls to experience the numerous pieces of art.

The Natural History Museum in Münster has unique objects to offer. The world’s biggest ammonite with a diameter of 1.8 meters is located in the museum’s foyer. The Paleontological Society had named it the fossil of the year in 2008. We are the only museum in Germany displaying “Portrait of the Milky Way” by Jon Lomberg, a twelve square meter, illuminated picture.
For adult groups the museum offers guided tours– by registration. Pupils and preschoolers can participate in age appropriate and exciting education programs led by a museum's educator.

From the Provincial Museum to the LWL-Museum of Natural History

At the end of the 19th century, Professor Dr. Hermann Landois, founder of the zoo in Münster, also initiated the founding of a separate Natural History Museum on the zoo grounds. On the 26th of June in 1891 the “Provincial Natural History Museum” on the Himmelreichallee was opened and on the 10th of February 1892 handed over to the public. Landois became the first volunteer director of the museum.

In October and November 1944 the building was badly damaged by air attacks. In a preventive act the collections had been outsourced ahead of time, so that the war damage was limited to the actual building.
During the beginnings of the museum the main part of the collection was taken from the stock of the zoological and botanical sections of the Westphalian provincial association. In addition to that, the museum benefited from dead animals of the zoo, which it could dissect and use for its collection.
When the old zoo decided to move to the western boarders of town because of space problems, the museum decided to come along. The Regional Association of Westphalia-Lippe (LWL), the head organization of the museum, made the construction of the new building possible. The large planetarium was integrated into the new building and has room for more than 260 people. The combination of a planetarium with a Natural History Museum has been unique in Germany until today.

The museum’s name went through several changes over the years. The “Provincial Museum of Natural History” turned into the “Westphalian Museum of Natural History – State Museum and Planetarium”. Since 2007 the name is “LWL-Museum of Natural History – Westphalian State Museum and Planetarium”. The director of the museum is Dr. Alfred Hendricks.
Still today a mold of the largest ammonite of the world is located in front of the former building on the Himmelreichallee. Since 1982 the building has been in use by the Westphalian school of music. The original giant ammonite can be found in the foyer of the current museum building on Sentruper Str. 285 and can be visited Tuesdays through Sundays from 9am to 6pm.

Tuesdays to sundays and on public holidays 9am – 6pm

Planetarium with changing show times. On holidays the program is like on sundays.

Your browser is out-of-date!